If Walt Disney decided to build a ski resort, it would look a lot like Whistler. 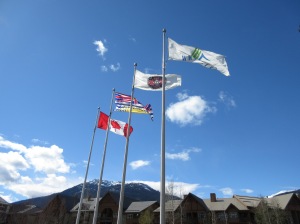 The village, as they call it, is designed to keep tourists circulating past all of the quaint shops and restaurants, all of which convey a mountain lodge facade of stone and wood, with elements of the prairie school of design most prominent. There is no blade of grass out of place and no litter on the ground on the brick-paved, pedestrian-only streets. I actually watched a custodian carefully scrub away a stain on the pavement left after a dog’s owner had already carried away the animal’s waste. It is what a ski resort looks like when clever people with gobs of money design a clean sheet of paper project-and the result is, quite frankly, fantastic. 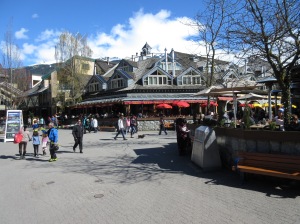 This won’t appeal to you, of course, if you like authentic western towns. There is no real history here, no frontier past. Me, I like both styles, but the fact is, you’re here to ski, not shop, and Whistler has some of the longest and best runs in the world on top of a fantastic infrastructure. Superlatives abound: half again as big as the next largest North American resort, it boasts far more vertical skiable distance as well. It was the site of the 2010 Winter Olympics.The Peak-2-Peak gondola sports the longest distance between spans in the world, and on it, you can ride between two very large mountains separated by a very deep valley.

Just like the village, the slopes are immaculately maintained. Unfortunately, I’m here during the shoulder season, and it has been one of the driest winters on record, so there is no snow at the lower elevations, which means the choices of runs is limited. But the ones that are open are very nice, indeed, and today, from atop the mountain, it’s clear as a bell, and you have a picture-postcard panorama of the Fitzsimmons Range spanning your field of vision as far as the eye can see, one perfect snow-capped peak after another. It’s a great day to be alive, and an even better day to ski. 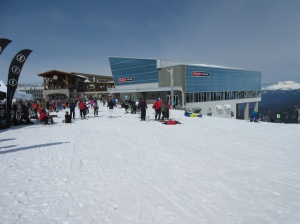 Which I do, for the best part of 5 hours. There are plenty of green runs, even at the top, but naturally at this elevation (above 7,000 feet) you mostly get solid blues and black diamonds. The lift tickets include the Peak-2-Peak gondola ride, which takes you to Blackcomb Mountain, and it would be foolish to ski Whistler and not at least take this ride, which is an engineering marvel and even has a glass-bottom cabin, which is the one I took. 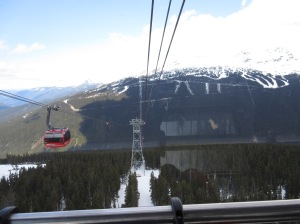 But there’s much more to do here than ski and shop. I spent all of my first day at Whistler just hiking around a gorgeous alpine lake. I walked from the village on well-marked trails. I’d even heard a bear had been spotted near the golf course along the walk within the last few days. 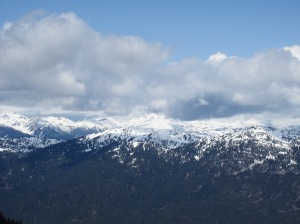 Yet all of this natural and man-made beauty wouldn’t matter if the people weren’t friendly, so I’m happy to report that everyone I ran into has been extremely helpful and courteous. I don’t know if that’s just the Canadian way or not-many of the service workers are from foreign countries-but I must say I was impressed. One cashier advised me not to buy the bottled water because the tap water was so good. She was right. It’s pure mountain water, but she could have just nailed me $3 for the H2O. And it’s not just the service workers. Stand for long looking around, and someone will ask if you need help. 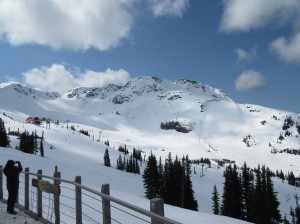 And both the residents and the guests have to be the most attractive young people on the planet. The women are just stunning. I’m a sucker for long straight hair, and I guess it’s back in style-while big blue eyes are timeless. In the mix, I found lots of locals, and of course, Americans. But there were also people from Germany, the Czech Republic, Australia, Great Britain, and China as well. It’s an international destination. So: tall, beautiful, extremely bright, friendly folk-what more do you want? 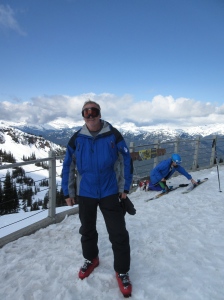 Well, I want a good Happy Hour, too, and here Whistler excels as well. Apres’ ski, there are too many options to list. This resort has by far the biggest bar scene I’ve ever encountered outside of a major city or a beach town. Come here, and you won’t be disappointed by the nightlife. 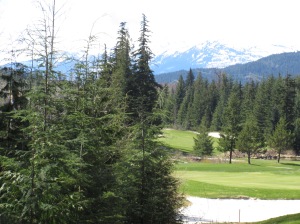 In fact, you won’t be disappointed by anything. Just come. You’ll like it, even if you’re not a skier. 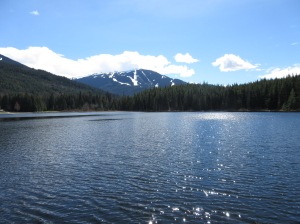 This entry was posted in Lifetsyle, Travel. Bookmark the permalink.